One woman dead, 19 more injured. One man in custody after driving his car through counter-protesters at the “Unite the Right” rally and march this weekend in Charlottesville, Virginia.

Black people, Native Americans, Mexicans, we’re all told to get over it, to let the past be the past. Slavery is over; forced sterilization is a thing of the past; forced assimilation and migration along the Trail of Tears happened so long ago.

Yet, white people will don “Make America Great Again” hats, Nazi symbols, KKK paraphernalia and beat, degrade, and murder minorities and allies when we refuse to live with glorified symbols of our oppressors. It literally took a young Black woman climbing a flagpole at the South Carolina Statehouse to remove the Confederate flag when lawmakers refused to get rid of this public symbol of oppression and slavery. 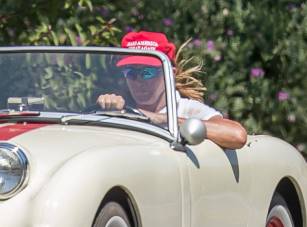 I worked in Indianapolis. Every time I visited my family in Chicago and then had to drive back to Indianapolis, I drove past a highway sign that read, “Birth place of the Ku Klux Klan.” Those of you calling remnants of the Confederacy a reminder of “the glory days” of the South, attempt to label these symbols as honorable memories, a testament to a Southern cultural heritage. I, and millions of others, see them as threats of violence, enslavement, Jim Crow, and oppression. But, that’s in the past.

There are not “many sides” to the terrorism of the racist, white supremacist, neo-Nazi “alt-right.” There is just terrorism. There is only hatred. There are white men who feel threatened by the pride and power of minorities to assert their right to exist as full humans. There are white men threatened by visions of equality because it means a loss of some of the privilege they’ve endured since colonizing North America.

Let’s call it what it is: racism. Hatred. White Supremacy. White Privilege.

Let’s name who it is: White men and women who manifest their hate in the rallying in the name of White Nationalism, in cheering the ban against transgender people from the military and public bathrooms, in jailing and hospitalizing those with mental disabilities, in proclaiming “you’re in America now; speak English!”, in voting “pro-life,” building a wall, putting more police on their street, banning Muslims, and repealing the Affordable Care Act – all under the guise of repairing the American economy.

Your implicit bias, and also explicit bias in the case of these white Supremacists, shows when you: when you question the competence of minorities to do the work that only white men were allowed to do for centuries; complain of the burden you experience when attending diversity trainings; deny that your ancestors built American systems and institutions meant to secure your dominance on the backs of women and minorities; and reinforce those same systems and institutions every day and in every aspect of your life.